The Electricity System 2 is an advanced system designed to teach practical applications in circuits.

The system completes and can be used with our Electricity System 1. Our system consists of a set of plastic blocks which house the electrical components (such as motors, buzzers, etc). Each block connects to the base by two or four plugs with 4 mm sockets. Once inserted into the board, the circuit starts to build. All the components of the kit are stored in a foam cushioned durable storage case.

EXAMPLE OF USE: Dynamo

How to transform mechanical into electrical energy.

A dynamo can be described as a kind of DC motor used in reverse. Also known as an electrical generator, it is a device for converting mechanical energy into electrical energy.

There are two types of generator or dynamo. Both turn rotational energy into electrical energy. One type involves rotating a coil inside a magnet. The other involves rotating a magnet inside a coil (like a dynamo found on a bicycle). Both types produce alternating current. Therefore, a DC motor is a dynamo operating in reverse.

In this experiment, the student can verify that the first motor is supplied with an electric voltage and transfers the mechanical motion to the second motor by means of a rubber band.
The motion produced by this motor is then used to produce an electric voltage which in turn can power the buzzer.

The buzzer will then produce an audible sound. 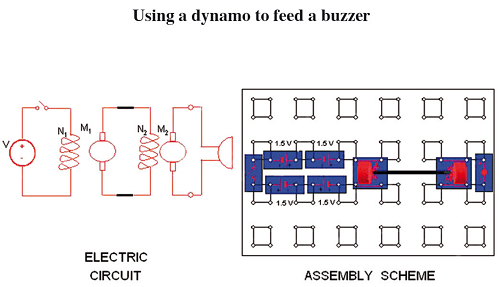 The electrical energy can then be used to power a buzzer